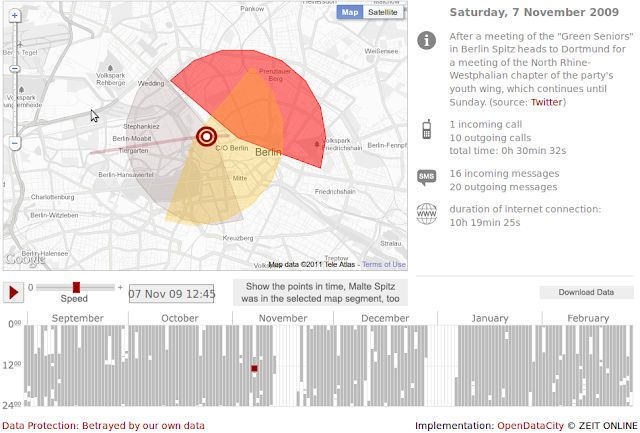 It is claimed that software freedom activist Richard Stallman famously doesn't own a mobile phone, claiming they present serious privacy concerns.  Just how much information do mobile telephone companies obtain from their subscribers?  Quite a lot as it turns out.

German Green party politician Malte Spitze sued his mobile phone service provider Deutsche Telekom, who released to him six months worth of his mobile phone data.  Spitze then made this available to ZEIT ONLINE, who combined the geolocation data along with Spitze's Twitter feed, blog postings and other publicly available online information to create an impressive tracker application.  The application visualizes Spitze's movements, activities, phone and SMS messages and web-surfing for the six months from August 31, 2009 - February 28. 2010.

ZEIT ONLINE's visualization reveals the wealth and fidelity of personal data that our mobile phone carriers collect and retain.  Spitze's data set is also publicly available if you'd like to scrutinise it further or produce your own visualization.
Posted by Chris at 7:00 AM