Much media attention has been focused on the events unfolding at the Fukushima 1 nuclear power plant.  Radiation levels at the plant and surrounding areas accompany almost every report but what do they actually mean?  Several charts have been published recently to help put things into perspective.

2. Alexandra, a user at Visualizing.org posted her Nuclear Radiation infographic.

They're all quite useful, demonstrating the enormous range of measurable radiation levels from that to which we're exposed in daily life up to the lethal doses.  However, I think Alexandra's infographic is most useful as it also visualizes dose rate.  This additional dimension does make Alexandra's chart a little more difficult to comprehend but it's worth the effort.

What do you think?

If you know of any other radiation dose charts then please let me know.
Posted by Chris at 9:57 AM

I recently came across Social Map: Placebook, the 2010 winner of the NACIS: Student Web Mapping Competition.  The stated aim of Placebook is:


to give [a] more accurate idea on how are Facebook users [are] distributed around the world.

It's an excellent application.  I found that the most powerful feature of Placebook was not the map but rather the additional graphics used to visualize social data.  You can choose to explore:

Placebook includes controls for focusing on regions (World, Europe, North Americas, South Americas, Africa, Asia and Oceania).  You can also sort the data to find interesting artefacts.  For example, I discovered that in Serbia & Montenegra a striking 77% of under-18 year olds have Facebook accounts; a significant outlier (Albania is a distant second at 30%).  The data was obtained in August 2010 using the "impact estimator" of Facebook's advertising interface.

You can also login to your own Facebook account to visualize the demographics of your own social network.  However, I chose not to as it gives Placebook access to your personal information and that of your friends.
Posted by Chris at 7:25 AM 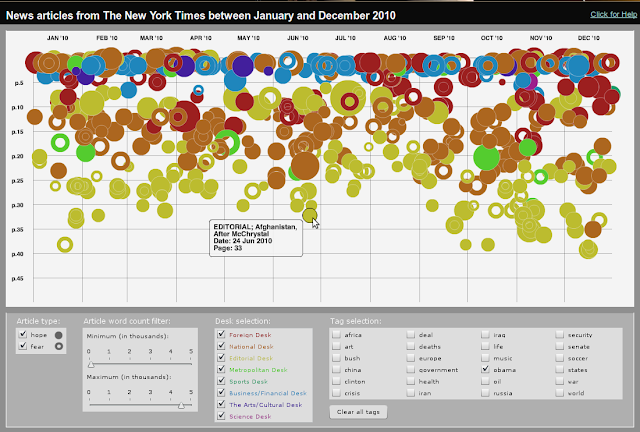 There's a long-running debate in the visualization community regarding the value of aesthetics to visualization.  For some, aesthetics or "eye candy" is considered a triumph of style over substance or form over function that serves only to confound understanding.  At the other extreme is the camp who believe that "ugly" visualizations are valueless.  Much of this opinion has little evidential support but that might be about to change.

A group of visualization researchers is conducting a user study to assess the impact of aesthetics on visualization.  The more people who participate the stronger study's conclustions will be.  The study end soon, so if you haven't already done so, please participate.

All you need is 20 minutes and a web-browser that supports Javascript and Flash.
Posted by Chris at 7:35 AM

As part of Visweek 2011, the IEEE has announced details its annual Visualization Contest.

This year the contest focuses on computational fluid dynamics:


The goal is to devise a visualization that allows for exploring the stability of a fluid dynamics simulation of a pump with respect to different models of its turbulences. One big challenge is the large amount of the data. The contest aims at demonstrating how novel visualization and interaction techniques from the fore-front of scientific research can help to solve real-world problems of high relevance - today.

Prizes include an iPad, free registration at VisWeek 2011 and certificates for team members.  The competition deadline is July 31, 2011.

Data sets and more details are available from the contest web-site.
Posted by Chris at 7:54 AM The resulting images are quite striking both in terms of their beauty and what they reveal about WiFi networks - that signal quality is highly variable even over a short range.  And I thought it was just my WiFi router that was like this.

Learn more about the project, browse the images or watch the video (below). 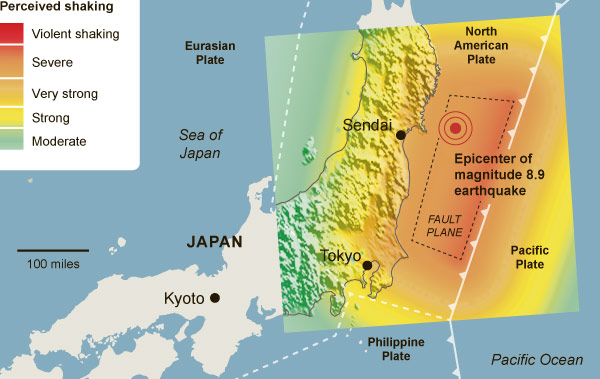 Shortly after the devastating Japanese earthquake on March 18 2011, the New York Times published an excellent series of visualizations showing the quake's fault plane, magnitude and the predicted tsunami spreading across the Pacific Ocean.

What I found particularly enlightening was the depiction of the fault plane.  I'd previously thought of earthquakes as emanating from a point source - the word epicentre reinforces this notion.  In fact, the earthquake arose from a section of the North American plate, several hundred miles in length, being thrust upwards by the movement of the Pacific plate beneath it.  The epicentre is the focus of the earthquake at which the force is greatest.

Kudos to the New York Times for their enlightening graphics.
Posted by Chris at 9:39 AM