Upon news of Osama bin Laden's death Twitter recorded the highest sustained rate of tweets in its history.  They provided the annotated chart shown above in which the number of tweets per second exceeds 3000 for more than one and a half hours.

In the days that followed the public response has run the full gamut of emotions from wild rejoicing to deep sorrow, and I've found myself wondering what the prevailing mood of the population has been.  The New York Times has attempted to answer this question at least with regard to its readership.  They asked their readers:


Was his death significant in our war against terror? And do you have a negative or positive view of this event?


and 13,864 of them responded by plotting their answers on a graph and leaving a comment.  The graph is shown below; each dot represents a comment.  I couldn't find any information regarding what the colour of each dot represents but I suspect it's the number of respondents who clicked in that spot - the darker the colour the larger the number of clicks. 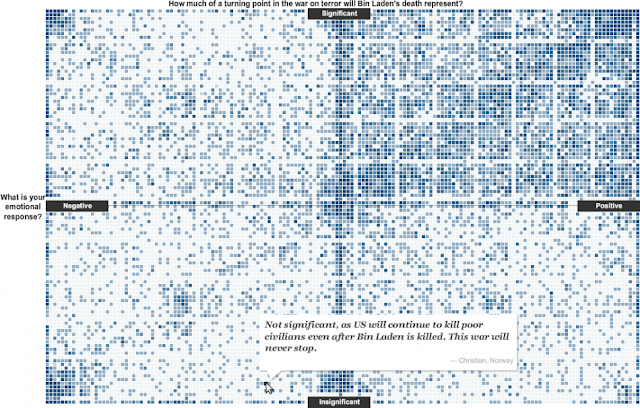 The chart is interactive allowing you to browse the respondents' comments.  You can see that the positive & significant quadrant received the most responses.  There's also a strong correlation between responses to the two questions (see the x = y cluster).  I can also see clusters of responses that represent strongly held positions: these lie in the corners of the chart and at the extremes of each axis.
Posted by Chris at 7:59 AM